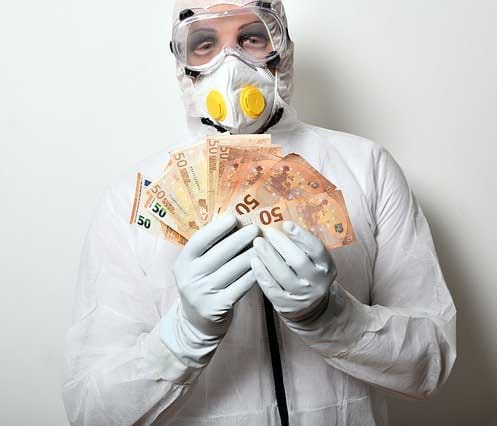 Global financial markets suffered sharp falls this week after a rise in coronavirus cases renewed fears of an economic slowdown.

The UK’s FTSE 100 share index closed 3.3 per cent lower, the sharpest drop since January 2016. And in Italy, which has seen Europe’s worst outbreak of the virus, Milan’s stock market plunged nearly 6 per cent.

In contrast, the price of gold, which is considered less risky, hit its highest level in seven years at one point.

This week, the CEO of one of the world’s largest independent financial advisory organisations warned against investors becoming complacent about an imminent Coronavirus-triggered market correction of up to 10 per cent.

That was the message from deVere Group’s chief executive, Nigel Green, as global equities registered losses following a surge in cases in Italy, Iran and South Korea over the weekend. The first cases have also been confirmed in Kuwait, Bahrain and Afghanistan.

“Global financial markets retreated on Monday as they reacted to the coronavirus headlines over the weekend,” he said today (Feb 24).

“But it is likely that they will quickly rebound, as they have consistently done in recent weeks. Indeed, stocks keep on reaching record highs.

“This is because many investors remain complacent about the far-reaching impact of coronavirus, which is continuing to spread – and a faster pace. This will inevitably hit financial markets and investors’ complacency leaves many wide open to nasty surprises.

“Major global companies, especially those with heavy exposure to the Chinese economy, are lowering profit guidances due to the outbreak. This will have a knock-on effect across international supply chains and throughout economies.  But is the message being heard by investors? In addition, coronavirus has struck at a time when major economies, including Japan, Germany, India and Hong Kong are facing a downturn due to other factors such as the U.S.-China trade dispute and political protestors, which could hit the world economy.

“Until such time as governments pump liquidity into the markets and coronavirus cases peak, a near-term correction – of up to 10 per cent – is increasingly likely. We are hoping for a V-shaped recovery, but our current view is that it will be U-shaped.

The London FT also reported that investors have “rushed out of equities” and into havens such as gold and US government bonds following a surge in cases over the weekend that intensified concerns over the global impact of the virus.

European equities opened sharply lower on Monday. The continent-wide Stoxx 600 tumbled 3 per cent in its heaviest sell-off since late 2018. Germany’s Dax and France’s CAC 40 dropped 3.3 per cent, while the UK’s FTSE 100 fell 2.7 per cent.