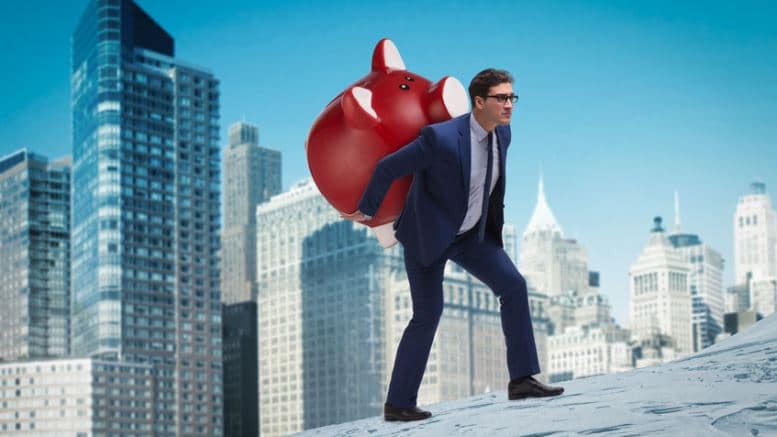 Martin Hooper, Associate at Barnett Waddingham, looks at the ISA19 deficit position and how things may develop

Barnett Waddingham’s most recent survey of the pensions disclosures made by the FTSE100 companies showed that the value of liabilities rose by approximately £100 billion over the year to 31 December 2016. This was driven largely by a fall in the discount rates which companies are required to use to discount future pension obligations. Despite this substantial increase in the value of liabilities, funding levels have remained remarkably stable, and the aggregate deficit only increased by around £10 billion on the back of strong asset returns and employer contributions of almost £10 billion.

The table below shows that over the past five years the pensions deficit, across the UK’s biggest listed companies, has actually improved slightly.

At first sight this might seem good news for the companies involved however, the improvement is much less than expected given contributions of almost £30 billion toward deficits by the scheme sponsors over the five-year period – in fact this should have led to a small aggregate surplus. Even in the absence of contributions and improvement would have been expected as schemes held assets, which should generate returns in excess of corporate bond yields, and so reduce any IAS19 deficit over time. The improvement shown in 2015 was, however, not sustained into 2016, mainly due to falling bond yields and rising inflation expectations pushing up valuations of liabilities.

Looking forward, short term issues such as the uncertainty following the UK election result have not yet led to significant market movements. Developments in the bond and equity markets will be important ahead of the key reporting dates in December 2017 and March 2018. Over the longer term the market is currently pricing in a gradual rise in interest rates, but if these do not materialise this will limit the amount of progress that can be made against deficits. The market has already priced in higher inflation expectations following the Brexit vote. However, further uncertainty in this area, and knock on effects on sterling, could further raise inflation expectations and push up valuations of liabilities.

On the other hand it has also been revealed that a reduction in the assumptions made for future life expectancy of FTSE100 employees, reversing a trend of increases dating back to the previous decade. In 2015 life expectancy in a male aged 65 was 23.3 years, this has now reduced to 23.1.

Although not a huge jump this year, changes in life expectancy projected by the latest version of the CMI model, which was published after the disclosures in our survey were prepared, shows further falls. This change in life expectancy predictions is more significant and for FTSE100 firms mean defined benefit obligations could reduce, by around £15bn, when disclosures are prepared next year.

It worth noting that life expectancy is still significantly longer than a decade ago and the updated version of the model is still predicting life expectancy will increase – just not as fast as previous versions did.

Does the IAS19 position actually matter?

The IAS19 position only provides a snapshot of the funding position and is arguably only really useful as an indicator of the relative positions of corporate pension funds. The IAS19 position is unlikely to be a primary concern to many schemes/ sponsors when formulating risk management plans.  The real cost of the schemes to the sponsor, will depend on how the assets are invested and how the liabilities are ultimately discharged.

The upcoming round of funding valuations is likely to show significantly worse positions than three years ago due to falling gilt yields. We believe many schemes will have to rethink their timetable for achieving full funding and the spotlight will fall on whether the gilts based funding approach, typically used for scheme funding remains appropriate. Even if it does, there will be questions over whether full funding on the gilts based approach can still be achieved in the same timescale. In practice there is likely to be a combination of increased contributions, longer recovery plans and use of more innovative non-cash based funding solutions for upcoming valuations.