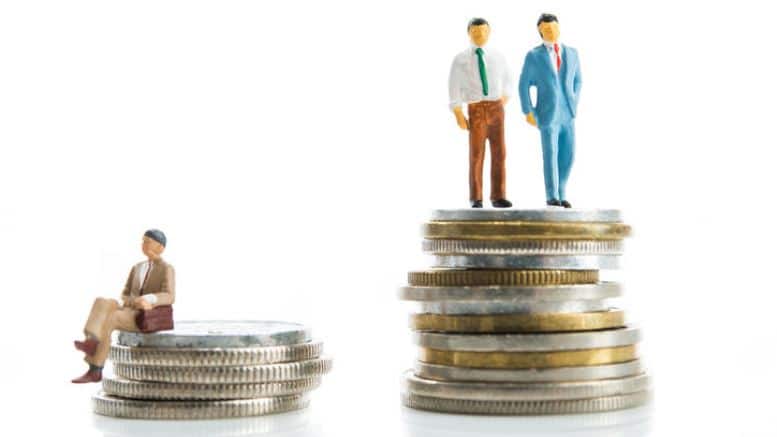 The pension deficit has been found to cause lower wages for workers in the UK, research has found. It is estimated that employees are being paid £200 less a year, compared with companies who have no pension hole to fill, as employers are desperately pumping money into defined schemes to bridge the gap. The news comes as it’s found that employers are using the schemes to subsidise older generations pensions, with young people and low earners unlikely to gain from the initiatives.

The majority of direct benefit pension schemes – a scheme where what you’re paid in your pension is based on the years you worked for your employer and the salary you earned – are now closed to new members. In 2016, 43% of workplace pensions were on an occupational defined benefit scheme, compared to 28% of a defined contribution plan. However, the main issue for organisations who offered such schemes is that they offer a guarantee for life. While it is good for workers, investment returns and employees living longer, it has meant businesses are paying more into the schemes than they initially budgeted for. Perhaps this is one of the reasons why 35% of schemes are closed to future accruals – meaning that older workers are unable to increase their earnings.

However, it is young people who are taking the biggest financial hit. With 85% of schemes closed to new members, younger generations are unable to join the schemes which they are unknowingly paying into. The Resolution Foundation found that young employees are paying an estimated £200 on average towards the schemes, through pay rises that they will never be granted.

It is not just this financial hit which workers are currently facing either, as it’s been revealed that 84% of FTSE 100 companies are offering employees a cash alternative to a pension. This is a result of the changes made to the lifetime and annual allowances in April 2016 – an estimated 90% of firms have changed their provision policy so far.

The changes last year, which restricted the tax relief threshold for incomes over £150,000, also affects savings greater than £1 million, which are now taxed. Many companies are now fearful of being hit by penalties and are changing their policy to comply, by offering cash alternatives to employees who may be at risk of breaching the lifetime or annual allowance.

It’s not just the top tier earners who are receiving such alternatives, with one in five offering employers cash instead of pensions to all employees. Out of those organisations who offered alternatives, 54% had no requirements for contributions to be made into a pension scheme.

While the state of pensions may be in disarray, membership increased to 68% in 2016, compared with 64% in 2015. However, it is public sector employees who are driving this with 88% of employees signed up to workplace pensions, compared with 60% of private sector workers (a narrowing gap since staged automatic enrolment in 2012, which will be rolled out to all employers by 2018).

Public sector employees are those with the highest contribution rates. However the ONS puts this down to automatic enrolment in schemes. When you consider that just 9.3% contribute 7% or over in the private sector compared with 48.2% in the public sector, it’s clear that the inequality perhaps runs deeper than automatic enrolment.

So, where does that leave pensions?

We’ve all seen the BHS pension scandal played out in the public over the past year and the £571 million deficit has propelled the issue into the spotlight once again. With many keen to avoid history repeating itself, pensions have become a key issue for the upcoming election focusing on the future of ‘triple lock’ to protect pensioner incomes.

The initiative, introduced in 2010, has caused generational issues; while it has increased the state pensions to be worth more £1,250 per year than when it was introduced, the UK’s state pension remains one of the lowest out of the OECDs member states.

Law dictates that the basic and new state pension must rise in conjunction with national average earnings, but the triple lock states that pensions will grow by the higher of either the former or 2.5%.  Many are concerned that the triple lock is adding a cost to the pension provision which cannot be afforded, it has increased the value of pension to 18.5% of full-time average earnings from 16% seven years previously.

While this issue hangs in the balance as the upcoming weeks play out in the general election, it’s clear that younger workers are hit the hardest. With rising retirement age and pension schemes which do not benefit them, the intergenerational balance needs to be struck right in order to address the challenging issues facing the pension industry.

Andrew Wayland is head of marketing at Everyday Loans