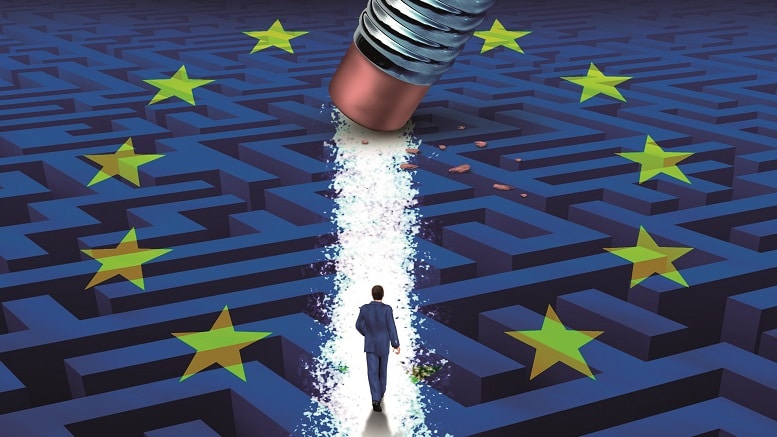 There continues to be challenges for companies with UK defined benefit (DB) pension schemes, challenges compounded by the imminent prospect of Brexit. Andrew Vaughan, partner at Barnett Waddingham, highlights the risks faced and how they are managed by European companies with UK pension obligations

A particular feature for European corporates is the scale of UK pension liabilities. Research into 75 constituent companies listed on share indices in France, Germany, Italy, the Netherlands, Spain and Scandinavia shows that they were committed to UK pension obligations of more than £100 billion up to 31 December 2015.

However, the average proportion of global revenue produced by the UK subsidiaries of these firms is just 7%.

European companies with UK businesses are potentially exposed to significantly greater pensions risk than the scale of their operations in the UK would suggest. Companies are also paying considerably more per head – in 2015, the average UK pension contribution per UK employee was over three times greater than the equivalent average for the global parent.

This may reflect cultural differences – for example, non-UK businesses may operate in countries where state pensions are comparatively more generous than in the UK. Also, DB pensions are more prevalent in the UK than in most other European countries. Alternatively, it may reflect differences in local scheme funding regulations.  Nonetheless, it highlights the materiality of pension liabilities for overseas corporates with UK subsidiaries.

In 2015, the average funding level of the schemes on an accounting basis was marginally higher than over the equivalent period for FTSE350 companies.

Between 2014 and 2015, DB contributions by UK subsidiaries increased by around 6%.

In most cases, the total level of equity holdings held in the UK scheme(s) was substantial relative to the UK firm’s net assets. There were a small minority of cases where the equity allocation exceeded the net assets of the UK subsidiary sponsor company. Exposure to equity markets via scheme investments represents a latent risk for sponsors.

Although the UK subsidiary might be able to rely on generous support from the European parent, the exposure to interest rate risk for some firms is noteworthy.

While schemes may reduce their equity holdings such that assets are aligned more closely with scheme liabilities, this could lead to a significant increase in the expected cost of providing benefits under the scheme.

The impact of Brexit

The existing risks to European sponsors of UK schemes are significant. With Article 50 to be triggered in the near future, these risks could change (with potentially a positive impact as well as negative) following the exit of the UK from the European Union.

One potential area is the UK funding regime. If the government decides to offer more flexibilities to DB sponsors following on from February’s Green Paper – that is, to pay much less attention to deficits and more enthusiasm in providing benefits in full as they fall due; however, this could be extremely disruptive and outside the European legislations. Some commentators have lobbied for the DB regulatory regime to move in a more liberal direction. There might even be a possibility that unpopular and complex R measures such as Guaranteed Minimum Pension – so called GMP – equalisation could be scrapped.

However, in practice our expectation is that the regulatory status quo is likely to be carried over into the post-Brexit landscape. Judging by the content of the recent Green Paper, there is no immediate prospect of the current regime being weakened materially.

Economically, the fall in the value of sterling could mean that European parents are better positioned to support their UK schemes in the immediate term. De-risking exercises or upfront costs for liability management projects could be relatively cheaper than before. There is already a mismatch between earnings and pension contributions for UK subsidiaries, so it may be possible for parent companies to commit further resources to support UK schemes.

The longer-term outlook remains uncertain – ultimately, a healthy economy should ensure that companies remain robust and in a position to commit resources to the DB scheme. Any negative impact on the UK economy will threaten this position. Further bouts of quantitative easing could ensure interest rates remain lower for longer, which will be unwelcome for unmatched schemes – as we have seen in the analysis above, this will include many of the schemes supported by European sponsors.

Another consequence will be the impact of administering cross-border schemes.  Untangling these problems will be neither straightforward nor cheap.

Despite the numerous risks, there are measures which UK sponsors can take to lessen the impact of a DB scheme on their business.

The short-term costs of DB obligations may appear fixed to a large extent – however, there may still be considerable scope for employers to lessen the impact of these costs.

Accounting assumptions contain a degree of flexibility and sponsors should be satisfied that they are taking account of this in preparing their year-end disclosures. There may be ‘quick wins’ relating to member options – e.g. ensuring a more realistic allowance for cash commutation than is reflected in the scheme funding basis. An allowance for transfer options might also be justified. In addition, the ‘best estimate’ nature of the accounting basis can enable appropriate tweaking of inflation or longevity assumptions.

The cash committed to DB schemes will depend on the scheme funding arrangement with trustees. As part of the triennial valuation cycle, sponsors should be clear on the assumptions underlying the trustee’s basis. There are some options to help ease the employer’s position – allowance for post-valuation experience or asset outperformance in determining deficit contributions may make a material difference to the final agreement.

There may also be scope to reduce short-term expenses, such as the annual PPF levy. Those firms with overseas parents should make sure the Experian score of the UK company makes allowance for any relevant mortgage certifications that could reduce the size of the levy reflecting the lower risk these schemes pose. Other options can be explored such as contingent assets from the overseas parent, which may lead to substantial levy savings over a number of years.

The long-term cost of a DB scheme will ultimately depend on scheme experience. For sponsors looking to lessen this cost, there are no easy options. For companies with substantial equity allocations who are looking for asset returns to do much of the work, this will entail a substantial risk for the European parent that returns do not materialise.

The de-risking market offers a method of transferring risks to insurers. In addition, a greater emphasis on pension flexibilities offers opportunities for members to take their benefits elsewhere. Flexible retirement options and enhanced transfer values enable risk to be transferred away from the scheme and sponsor, sometimes with an expected reduction in cost over the long-run as well.

The options available will entail upfront costs to varying degrees. However, for overseas parents the weakened level of sterling may facilitate this process and allow them to tackle their UK pension obligations and reduce long-term risks.